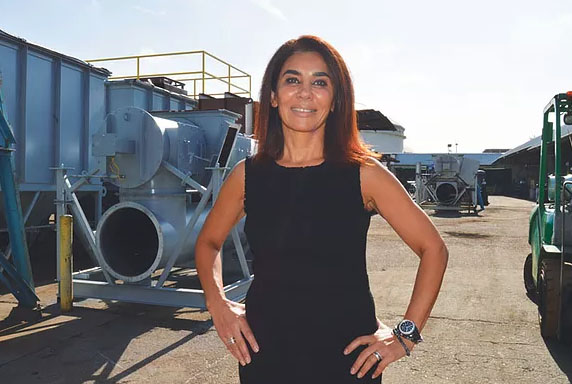 This article originally appeared in the Long Beach Business Journal on October 23, 2017 and was written by Brandon Richardson, Senior Writer.

After years with Fluor Corporation, chemical engineer Anoosheh Oskouian became unsatisfied with the types of projects she was involved with and began looking for new career possibilities.

Oskouian, an Iranian immigrant who had moved to the United States in 1978, and John Von Bargen began working at Ship & Shore Sheet Metal in Signal Hill, adding their passion for environmental work to the mix.

“The original owner could never really see our vision. So in the year 2000 he decided to take his type of business and the sheet metal work away,” Oskouian said. “Overnight I literally had to make the decision whether I wanted to keep what we had developed for five years or do we just forego all the work we had done.”

Oskouian reminisced about the owner asking her if she wanted to purchase the company’s operations and assets on a Thursday and her registering the new business on Friday. Overnight, Ship & Shore Sheet Metal became Ship & Shore Environmental, with Oskouian stepping into the position of chief executive officer to oversee the company that manufactures systems to help businesses reduce air pollution and comply with emissions standards.

Oskouian’s success, though encouraging, is nonetheless an exception in the male-dominated world of STEM (science, technology, engineering and mathematics) fields.

According to the American Society for Engineering Education, in 2015, female students received 25.2% of the total master’s degrees awarded in engineering. And, in a June 28 Scientista Foundation piece by Molly Connell, the growth rate of female engineering students is three times higher than that of males, but if current trends continue parity would still not be seen until 2070. Additionally, Connell’s article points out that only 13% of practicing engineers are women, with one out of three female graduates not working in the field.

“There’s not as much of an increase [in the number of female engineering students] as I would like to see. I do go to universities and other places every now and then and give talks,” Oskouian said. “But I do find women who are stepping into the arena of a technical field. They have come in knowing what they are going to be facing. They come in ready to go to the battlefield.”

Aside from wanting to see larger numbers of women in the field, Oskouian noted that the U.S. is not producing enough engineers in general, regardless of gender.

Oskouian views her position as a successful businesswoman in a male-dominated field as an advantage rather than an obstacle to be overcome. When speaking to young women interested in similar career paths, she said she emphasizes the importance of not being made to feel intimidated and to not let anyone make you feel “less than” because you are a woman.

During her years with Fluor, Oskouian said the company had a quota to meet regarding the number of female engineers it hired. She recalled office jokes about only being hired because she is a woman, but then basked in the memories of women demonstrating their competence, proving the hecklers wrong.

“There have been a few times that we have been discriminated against. People who are of the type to be judgmental and discriminatory against women, they will never speak of it. But you can feel that’s what they think,” Oskouian said. “One thing I always have said and like to remind myself from time to time is stay true to the inner voice and stay true to what your true capabilities are as a woman. And don’t let anything take that away from you.”

If the opportunity arises, Oskouian said she encourages women to enter into male-dominated fields because they will automatically stand out. She said being a minority in an industry allows one to view problems and solutions in a different light, thinking outside the box and taking a broad approach, opposed to men’s tendency to focus in on specific, narrower aspects.

“I also always like to remind everyone to please not play the victim game,” Oskouian said. “You have a voice to speak, you have a platform to let yourself be heard and stand up for your rights. That is the route I usually like to go.”

In September 2016, Oskouian partnered with China-based Aier Environmental to complete two projects in China, with more on the way. She explained the Aier is also a woman-owned business with a similar business model to Ship & Shore, which made her think it would be a good match. One current project is already installed and undergoing final fine tuning, while the other is underway.

With the Chinese government cracking down on industrial pollution, Oskouian said she had eyes on China for additional work for a while before taking on work in the area. As governments around the world continue or begin to more strictly regulate air quality, Oskouian explained that her company will continue to nurture partnerships to expand its work to other nations. Ship & Shore has current proposals in Europe and India, and a forthcoming business meeting in Mexico, while remaining focused on the U.S. market.

“Another thing I always tell people is they need to know we do not have any geographic boundaries in the air,” Oskouian said. “We can all be divided by land and have territories as far as what we like to do or not like to do, but the air does travel and we are eventually all affected by it no matter what you do. We all breathe the same air that is out in the atmosphere.”

Looking to the future of her company, Oskouian explained that she hopes to continue expanding its footprint through partnerships rather than setting up a Ship & Shore office or purchasing existing companies in other countries. To accomplish this, she said she will continue to use the advantages of being a woman in a male-dominated industry, which she hopes will encourage the next generation of female engineers.

“Women have become more outspoken about what they can do and encouraging others to walk the same path,” Oskouian said. “We have women leaders who are trying to take it to the next level and I think other females in all walks of life really look up to people who have done it and think ‘if they did it, it is possible for me to do so.’ All of it is coming together to pave the way for others.”