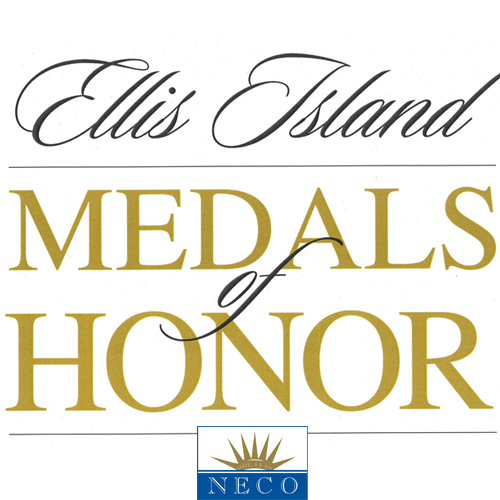 “I am honored to have been recognized among such a distinguished group of foreign born American entrepreneurs. This award is a true testament that through hard work and perseverance, the United States of America is a land of immense and equal opportunity for all,” said Oskouian.

The 29th Annual Ellis Island Medal of Honor Ceremony was held on Ellis Island at 6:30 p.m on May 9th. The Ceremony was followed by a Gala Dinner in the historic Great Hall. Emmy-winning Senior Correspondent Marvin Scott and fellow Emmywinning Nightly News anchor Tamsen Fadal, both of WPIX-11, were the Masters of Ceremony.

Chairman of NECO Nasser J. Kazeminy stated, “NECO seeks to inspire America to embrace diversity, tolerance and respect for all of its citizens by celebrating those who have given so much of themselves to the betterment of our nation and our world. Each of these honorees represents traits that I admire in great Americans: the vision of a better world for all, the tenacity to overcome challenges, and the leadership and imagination to blaze their own trail. And most importantly, they have the humility and self-reflection to appreciate the amazing opportunities that America has given them. They inspire me and we honor them so they can inspire others as well.”

The Ellis Island Medals of Honor embody the spirit of America in their celebration of patriotism, tolerance, brotherhood and diversity. We recognize individuals who have made it their mission to share with those less fortunate their wealth of knowledge, indomitable courage, boundless compassion, unique talents and selfless generosity; all while maintaining the traditions of their ethnic heritage as they uphold the ideals and spirit of America.

As always, NECO remains dedicated to the maintenance and restoration of America’s greatest symbol of its immigrant history, Ellis Island. Since the Medal was founded in 1986, we have honored such distinguished and diverse Americans including: six Presidents of the United States; Nobel Prize recipient Elie Wiesel, Generals Norman Schwarzkopf and Colin Powell, Hon. Hillary Clinton, Sen. John McCain, Muhammad Ali, Frank Sinatra, Barbara Walters, Mike Wallace, Quincy Jones and Mia Farrow, all who have distinguished themselves through their significant contributions to this country.

The Ellis Island Medal of Honor ranks among the nation’s most prestigious awards. The U.S. Senate and House of Representatives have officially recognized the Ellis Island Medals of Honor, and each year the recipients are listed in the Congressional Record. A complete list of Medal recipients can be found on the organization’s website, https://www.neco.org.

About Ship & Shore Environmental, Inc. Ship & Shore Environmental, Inc. is a Long Beach, Calif.-based woman-owned, certified business specializing in air pollution capture and control systems for industrial applications. Ship & Shore helps major manufacturers meet Volatile Organic Compounds (VOC) abatement challenges by providing customized energy-efficient air pollution abatement systems for various industries, resulting in improved operational efficiency and tailored “green” solutions. Since 2000, Ship & Shore has been prepared to handle and advise on the full spectrum of environmental needs with its complete array of engineering and manufacturing capabilities and multiple offices around the U.S., Canada, Europe and most recently, China. With over 100 specialized professionals spread throughout the world, the company is dedicated to designing tailored solutions for its energy clients.